The prospect of devolution can perhaps cause people to get too excited (Brexit; Catalonia) or perhaps not excited enough (the last Labour Government’s experiment with regional assemblies; the current roll-out of combined authorities). Predictably, this blog post focuses on the latter category.
First of all, in order to understand planning in Great Britain you need to understand its post-devolution administrative structure, following the enormous changes of the last 20 years.
It is now 20 years since referendums in Scotland and Wales led to the creation of the Scottish Parliament and National Assembly for Wales, with the Good Friday Agreement and Northern Ireland Act 1998 following a year later, leading to the creation of the Northern Ireland Assembly.
Slowly but surely, four different planning systems have developed, summarised in a January 2016 House of Commons library briefing paper, Comparison of the planning systems in the four UK countries.
In relation to English devolution issues, perhaps dull is good, with arguments often focusing on worthy but dull questions of efficiency of administration and decision making, and the unlocking of funding streams.

Directly elected regional administration of London was reintroduced in 2000 following a referendum in May 1998, in which there was a 72% majority vote (out of a 34% turnout) for the establishment of the Greater London Authority, to be led by an elected Mayor. Despite the low turnout, the size of the “yes” vote did seem to recognise the need for a unified voice for London that had been missing since the abolition of the Greater London Council in 1986.
The Labour Government of the time attempted to use elements of the London model to introduce directly-elected regional assemblies across England. However, it became plain that there simply was not the public appetite. Voters rejected the proposal for a regional assembly for the North East 77.9% to 22.1%, on a turnout of 48% in November 2004 and other proposed referendums for the North West and for Yorkshire and the Humber were then dropped. Whilst there is still some nostalgic harking back to the regional planning of the time, the ridiculously complicated structure in the Planning and Compulsory Purchase Act 2004 took the form of regional spatial strategies, prepared by ‘regional planning bodies’, comprising regional assemblies of co-opted local authority members. The process was closely overseen by central Government and indeed each final regional spatial strategy was published by the Government. So, hardly devolution – and with regional boundaries that often had no historic or emotional basis – although a potentially helpful administrative structure for coordinating local authorities and determining local authority housing targets.
Regional spatial strategies, along with all mentions of the “r” word including the regional planning boards, regional assemblies and regional development agencies (save for the London Development Agency, which survived a little longer) were swept away following the coalition Government coming into power in 2010. The new mantra of localism dictated the removal of top-down targets in favour of the bottom-up idea that it would be more effective for local authorities to determine how to meet their and their neighbours’ housing needs via the Localism Act 2011’s “duty to cooperate”, a Cheshire cat’s smile if ever one there was. Coordinated investment into the regions, including application of EU structural funds, became more difficult following the abolition of the regional development agencies, a vacuum only partly filled by LEPs (voluntary local economic partnerships between local politicians and business people).
But local politicians (the public? I’m not so sure) continued to press for greater devolution of powers to the regions, particularly against the background of the greater autonomy given to Scotland in particular in the run-up to the 2014 Scottish independence referendum (where there was a 55% vote against independence on an 85% turnout – that was clearly a vote that clearly did matter to its electorate). The Government embarked on negotiating a series of ‘devolution deals’ with groups of local authorities. The first deal, to create the Greater Manchester Combined Authority, was announced in November 2014.
The Cities and Local Government Devolution Act 2016 was, as set out its explanatory notes, “intended to support delivery of the Government’s [2015] manifesto commitment to “devolve powers and budgets to boost local growth in England”, in particular to “devolve far-reaching powers over economic development, transport and social care to large cities which choose to have elected mayors” and “legislate to deliver the historic deal for Greater Manchester”. The Act takes forward a number of reforms which are intended to allow for the implementation of devolution agreements with combined authority areas and with other areas. It is enabling legislation which provides a legislative framework which can be applied flexibly to different areas by secondary legislation.”
The devolution deals to date are listed on the Local Government Association’s website. The powers agreed to be devolved have been different in each case. The position is well summarised in a House of Commons library briefing paper, Devolution to local government in England (23 November 2016): 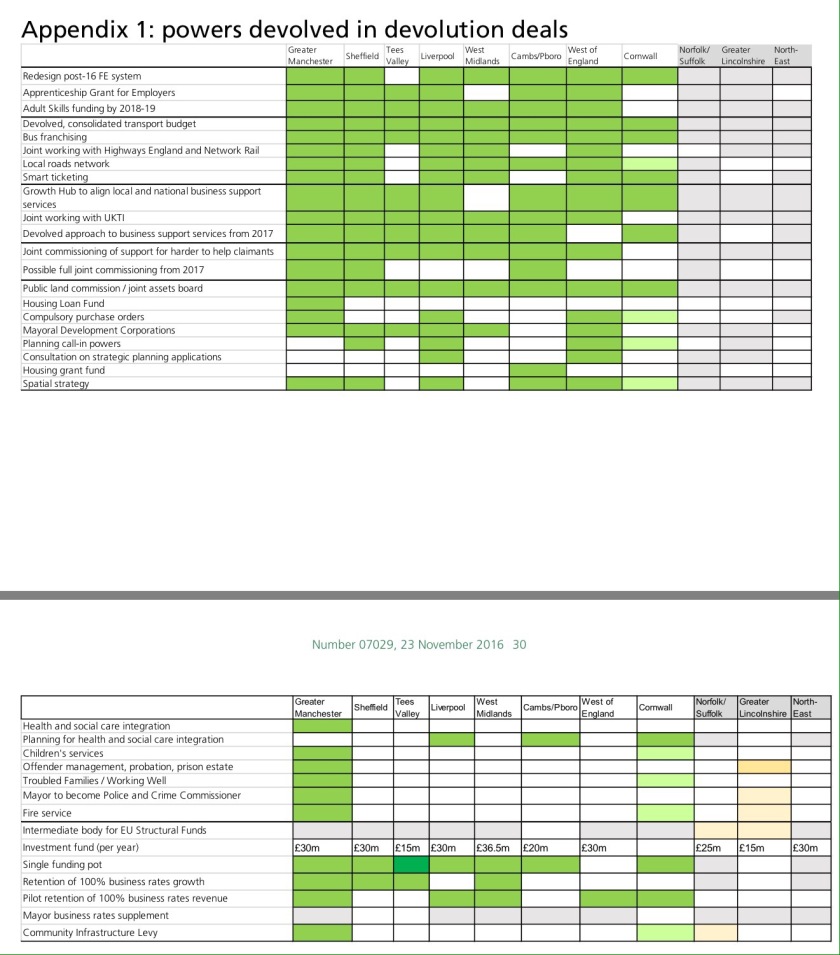 It will be seen that some deals include the power to create a spatial plan for the area, and/or the power to establish Mayoral Development Corporations. Some deals will also permit the combined authority to use compulsory purchase orders, with the consent of the local authority in which the land or property is located.

I looked specifically at the West Midlands Combined Authority in my blog post Devo West Mids (24 October 2016).
So far we have had mayoral elections for six combined authorities, which all took place in May 2017. Turnouts were all very low indeed: 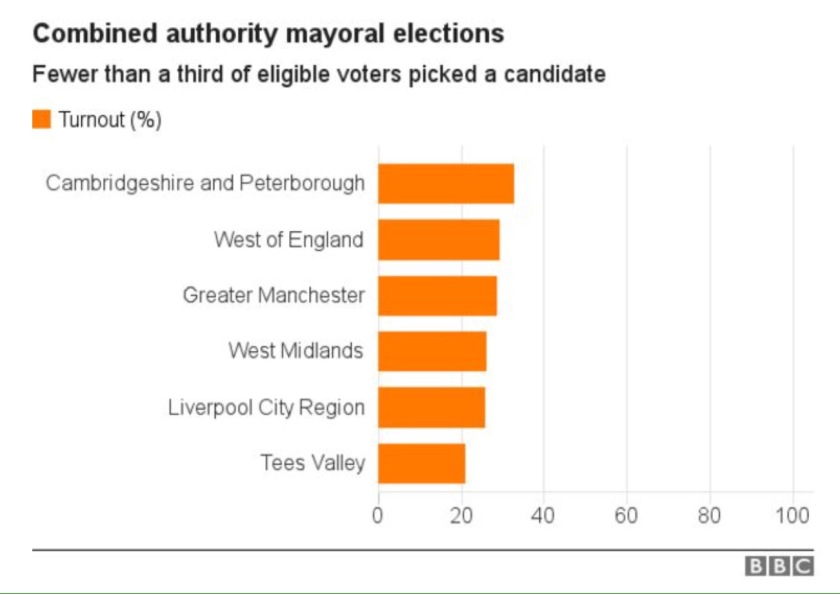 Whilst regional devolution may not capture the attention of voters (in fact I’m sure it is utterly confusing to most), undoubtedly it presently brings the promise of significant funding streams from Government. Professor Janice Morphet has also pointed in her 2016 book Infrastructure Delivery Planning to the work of economist Paul Krugman in showing the growth in national GDP that can result from investment decisions being made at a sub-national level. More practically, big personalities are important. That has been the experience in London – and Greater Manchester and the West Midlands both now have strong Mayors, in the shape of Andy Burnham and Andy Street respectively, who will undoubtedly drive those great city regions in an equivalent way.

A further election, in the Sheffield City Region, is due to be held in May 2018. Why the delay in Sheffield? The city region, which will control additional spending of £30m a year over the next 30 years, was originally going to include Chesterfield and Bassetlaw (which authorities would thereby be able to participate in the significant government funding available). However, Derbyshire County Council (which would automatically thereby be drawn into the arrangement and which opposed “powers for key services in the town being handed to a Sheffield City Region Mayor”) successfully judicially reviewed the process, alleging consultation flaws in R (Derbyshire County Council) v Barnsley, Doncaster, Rotherham and Sheffield Combined Authority, Secretary of State and Chesterfield Borough Council (Ouseley J, 21 December 2016). Chesterfield is in the county of Derbyshire and Bassetlaw is in the county of Nottinghamshire. Ouseley J accepted that the views of the public should have been, but were not, specifically sought as to whether Chesterfield Borough Council should be a part of the combined authority. The case led first to the Sheffield City Region mayoral election being delayed by a year and then to Chesterfield and Bassetlaw withdrawing their applications for full membership (in the case of Chesterfield after Derbyshire had resolved in June 2017 to carry out a full referendum of all Chesterfield residents).
The momentum generally appears to have paused. Section 1 of the Cities and Local Government Devolution Act 2016 places a duty on the Secretary of State to provide annual reports to Parliament setting out progress on devolution across England as soon as practicable after 31 March each year. The Local Government Association is concerned that this year’s report has not yet been published.
We are at an interesting point.

First, am I being too downbeat about the benefits of further devolution? I see that Lord Heseltine and Ben Rogers are speaking on Giving Power to the People: The Future of Devolution at the Future City Festival on 19 October 2017. Is there currently the political, or public, will?
Secondly, what now for London? In my view, the devolution of power to London (including reducing to an extent the powers of individual boroughs) has been a success. The moves towards greater powers for the Mayor of London have continued, which is welcome, but should there be more? Ben Rogers wrote an interesting FT piece Would more independence for London benefit the nation? on 3 October 2017.

Thirdly, and most importantly, what changes will Brexit bring? For a start we will see an end to EU structural funding, much of which was to be passed to local areas, although the Government has guaranteed any spending of these funds that is agreed before the UK leaves the EU. But more fundamentally, as again Professor Janice Morphet has pointed out, in her 2017 paper (not yet published) to the Oxford Joint Planning Law Conference we risk losing part of the drive towards devolution that arises from the EU’s principles of subsidiarity and fairness, which translate into for instance the application of structural funds and the development of the Trans European Networks which have been an impetus for transport infrastructure investment.
Ultimately, might it be the case that some devolution is ruled by the heart and some by the head? English devolution may be in the latter category, described indeed this week in EG this week by Jackie Sadek as a “fragile flower”. Let’s hope it’s not trampled upon by politicians with only a March 2019 deadline in mind.
Simon Ricketts, 6.10.17
Personal views, et cetera

One thought on “Everyone Knows This Is Nowhere: Devolution”