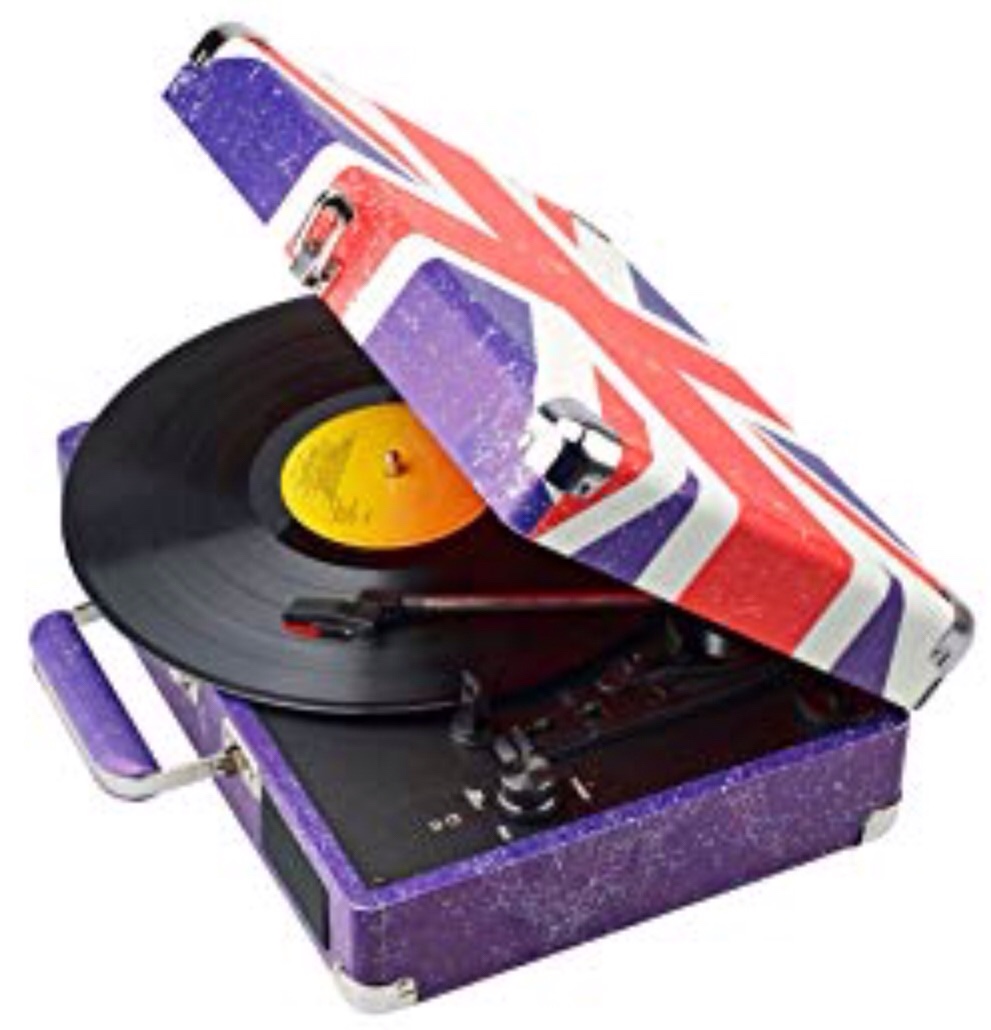 Stop me if you’ve heard this song before but…

The clamour continues for Parliament to revise the principles of compulsory purchase compensation, currently set out in section 5 of the Land Compensation Act 1961. 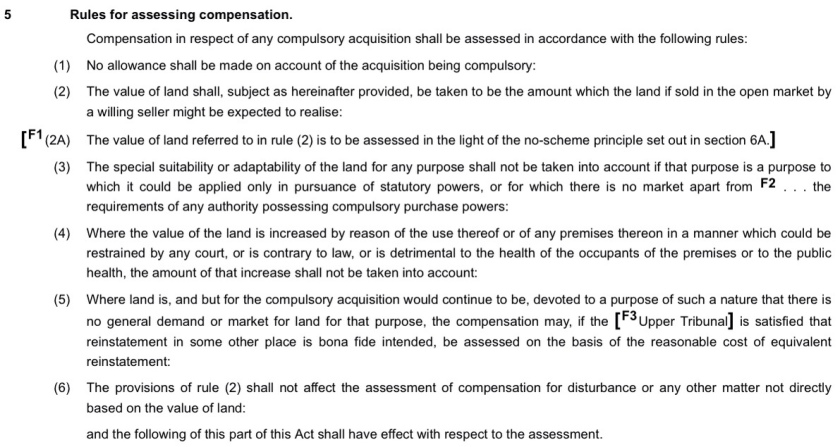 None of the clamourers have, as far as I know, set out precisely what amendments they would make to section 5, but the concern appears to be that the principles allow land owners to benefit unduly from a windfall, by allowing them in part to be compensated for the hope that planning permission would have been granted for a valuable form of development on the land being acquired, were it not for the compulsory acquisition, and that this is unfair; goes beyond what might be considered to be “market value”, and/or is holding back the development of new homes.

This isn’t a new song. In my 20 May 2017 blog post, Money For Nothing? CPO Compensation Reform, Land Value Capture, I tried to read between the lines of what was being said in the February 2017 housing white paper and in the May 2017 Conservative manifesto on the question of reforming the compulsory purchase compensation process.

But the volume is getting louder.

The issue is being considered by the House of Commons Communities and Local Government Select Committee in its land value capture inquiry, the final session of which is on 5 September 2018, with evidence to be given at that final session by planning minister Kit Malthouse.

A pan-political coalition of 16 NGOs including Shelter, the National Housing Federation, the TCPA, CPRE and Crisis wrote an open letter to the Secretary of State on 18 August 2018 calling for reform. It was reported in absurd terms on the Sun that day:

A little more (but not much more) detail is set out in Shelter’s blog post An unlikely coalition for land reform (21 August 2018). Shelter has been lobbying on this issue, from the time that its head of policy and housing development was Toby Lloyd, now Theresa May’s housing adviser within Number 10.

The IPPR think tank (one of the signatories to the open letter) has also now published a report The Invisible Land: The hidden force driving the UK’s unequal economy and broken housing market (28 August 2018). It has the same tune: 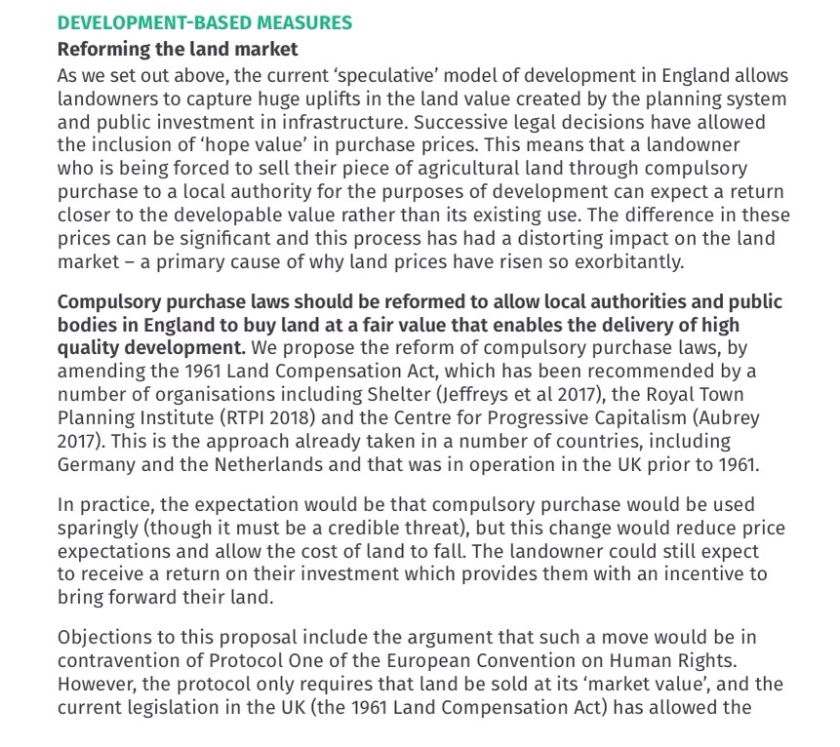 I hesitated before writing this blog because the response is so obvious.

The law does not operate at all in the way that these people assume. No real life examples are given. Indeed, there is no indication that any practising CPO surveyor or lawyer has assisted with either the Shelter-led group’s work or the IPPR’s work. Show of hands?

The law is as set in, for example:

⁃ the written evidence submitted to the Select Committee inquiry by the Compulsory Purchase Association. The evidence includes examples of claims made following the Olympic Park CPO.

It’s not rocket science to deduce that threatening to acquire land at less than market value (ie less than what the owner could have received for the land if he or she had chose to sell it on the open market – albeit of course the last thing he or she usually wants is to sell it!) would lead to:

⁃ owners being even more likely to hold out against compulsory acquisition in whichever way they can.

⁃ if the hope of securing permission for development is to be ignored (accepting that a land owner can never claim compensation for any value generated by the scheme underlying the compulsory acquisition – we are only talking about the prospect of development in the no scheme world), land owners and promoters of development not risking their own money in the promotion of land for development. Why would they, if the acquiring authority is going to be able to step in and effectively take the benefit of that work for free?

Maybe the problem is one of terminology. Do people think that “hope” value is something that is just that, hope, rather than a forensic examination of whether, and if so, what, development would have been likely to be approved if the scheme underlying the CPO had been cancelled on the valuation date? Maybe they should read some decisions of the Lands Chamber of the Upper Tribunal (the Lands Tribunal, in old money) or of the courts, for instance last year Bridgend County Borough Council v Boland (Court of Appeal, 14 July 2017). Do they think that the Tribunal has ever been over-generous to a claimant in reaching its determination as to what might have been approved in the no scheme world? Examples would at least take the debate forward.

The IPPR paper points to Germany by way of example, where the German zoning system obviously largely removes the concept of hope value – you’re zoned or you’re not. But that is not at all our UK planning system. Should it be? Well that’s another interminable debate and shall we get Brexit out of the way first before, er, we move towards a continental planning system?

Of course, the idea might work as part of a system where all major development is promoted by a public body, whether or not backed by a private sector development partner. But that is a world away from where we are, is alien to our market based economy and likely to lead to long bottle-necks given the lack of suitable resources at present within most local authorities, as well as lead to questionable outcomes in terms of procurement and in terms of sustainable, economically efficient, development. The public sector does not even have the resources to allocate the right land for development without massive input from the private sector in promoting specific sites (terminology problem again – “promoting” isn’t about PR but about spending, at risk, large amounts of money on preliminary technical work, to a significant level of detail, to ascertain constraints, infrastructure requirements and capacity).

And of course, there may be political arguments for acquiring land compulsorily at less than market value. But let’s be clear that such an exceptional political intervention would need to be justified. If the current clamour is in truth a clamour for the state to be able to dispossess people of their property for less than what it is worth, be brave enough to say so, explain why it is necessary in the public interest and then we can have the debate on that footing.

But if the idea is indeed to pick up land at or near existing use value, conceptually that really isn’t difficult under the present system. Be a brave authority by allocating land for a new settlement, covering land in as many ownerships as is necessary, making clear that of course it has to be developed in its entirety to be sustainable and that piecemeal development will not be acceptable. Be clear in your policy making that recourse will be had to compulsory purchase powers where necessary. Set out the extent to which the development is dependent on new infrastructure. Make clear where the new infrastructure would not be coming forward were it not for the new settlement proposal. The practical difficulty lies more with the fact that, for compulsory purchase to be a credible delivery mechanism such that the local plan policy can be shown to be “sound”, most local authorities would need private sector backing and most private sector participants would not underwrite significant compensation liabilities without being pretty certain that there will be planning permission. This is the scratch in the record that you don’t get past. Here’s where you need to lift the stylus and move it on a bit, whether that’s a role for Homes England funding or by allowing significant new settlements to be promoted as an NSIP so that the necessary planning and compulsory purchase steps can take place at the same time.

The frustrating thing is that the compulsory purchase compensation process is far from perfect and much could be done to reduce uncertainty for acquiring authorities and their private sector partners (usually fully underwriting the authority’s liability by way of an uncapped CPO indemnity agreement). The areas where the risk of significant compensation liability can discourage use of compulsory purchase are not questions of what hope value can be attributed to the prospect that the land might have been developed for other valuable purposes in the no scheme world (where the situation arises – not often – the position is usually well documented and can largely be quantified). In my experience the scary risks, where large and unpredictable compensation numbers can in fact arise, are more in such areas as:

⁃ where business premises are being acquired, is the business likely to claim disturbance compensation on the basis of total extinguishment (by demonstrating that there is not a reasonable relocation opportunity open to it)? If so, the acquiring authority will often have little feel for what the ultimate justifiable compensation figure will be due to lack of access to information that is confidential to the business, other than published accounts.

But my basic pleas are:

⁃ for the Government to take a careful look at how the present system works in practice before making any amendments to section 5.

⁃ for those seeking to justify changes to the system to be more precise about their concerns, based on real examples, and as to what changes they are seeking.

⁃ for Parliament one day to have time to review properly and consolidate compulsory purchase legislation.

Oh and, obviously, the answer to the question was that Market Value minus Hope Value = < Market Value. 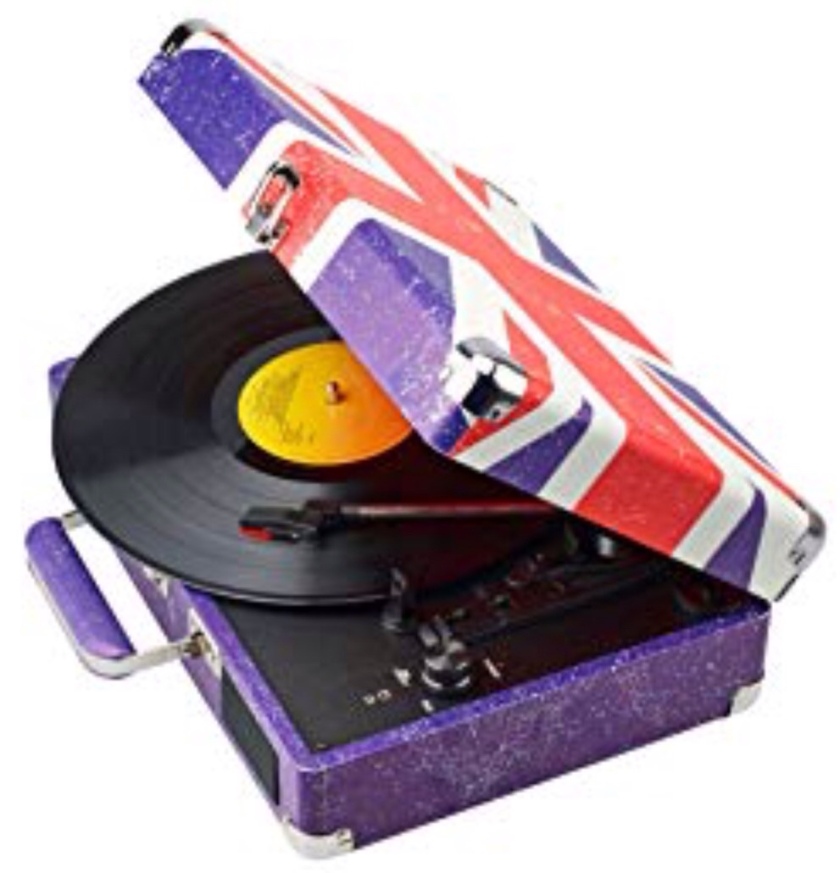