Two reasons not to press print:

It’s long. The Environment Bill, which had its First Reading on 15 October 2019, comprises 232 pages. It has 130 sections and 20 schedules. If you want a quicker read, the Explanatory Notes are only 212 pages.

Its shelf life may be short. Of course, we are likely to see a General Election before the Bill has made much progress (although there has been rumour that it may proceed quickly to Second Reading this month) and it will at that point fall unless a motion is passed to carry it over to the next Parliamentary session.

However, there is much within it of interest, and much of direct relevance to the operation of the planning system. I’m sure I’ll come back to various elements in different blog posts. The purpose of this post is to flag the main parts to be aware of from a planning lawyer’s perspective and first to look in particular at the improvements (yes improvements) that have been made to the first part, which sets out the new, post-Brexit regime that would apply to environmental principles and governance.

I am focusing on the relevance of the Bill to English planning law. For a detailed explanation of the territorial extent of each of its provisions, see Annex A of the Explanatory Notes, and the detailed table contained in Annex A.

NB There is no additional protection for the natural environment that could not have been secured with us still in the EU, and there are obvious risks of replacing protections in international obligations with protections in domestic legislation that (even if it is enacted in this form and brought into law) is vulnerable to political short-termism, but I set that issue to one side for the purposes of this summary.

Environmental Governance (Part 1 of the Bill)

This covers the ground previously mapped out in the December 2018 draft Environment (Principles and Governance) Bill which I covered in my 22 December 2018 blog post The Office For Environmental Protection, although the ground has moved substantially.

Some of the changes, and the reasoning for them, are summarised in the Government’s Response (published alongside the Bill on 15 October 2019) to the House of Commons Environment, Food and Rural Affairs Committee’s Pre-legislative scrutiny of the Draft Environment (Principles and Governance) Bill (30 April 2019).

Having flicked through Part 1 and compared it to the December 2018 draft, I would note the following:

Clause 1 to 6 are entirely new, enabling the Secretary of State to set long-term (at least 15 year) “environmental targets” in respect of any matter which relates to (a) the natural environment or (b) people’s enjoyment of the natural environment. At least one target must be set in each of the following priority areas: air quality; water; biodiversity, and resource efficiency and waste reduction. A target in relation to particulate matter in ambient air must also be set. The Secretary of State must take independent advice before setting targets, must be satisfied that the target can be met and there are restrictions on his ability to lower the target. Draft statutory instruments containing the targets must be laid before Parliament by 31 October 2022. There are provisions in relation to reporting and regular reviews of the targets.

Interim targets must be set out in the environmental improvement plans which the Secretary of State must prepare pursuant to clauses 7 to 14 (which largely reflect the draft).

(a) the principle that environmental protection should be integrated into

the making of policies

(b) the principle of preventative action to avert environmental damage

(c) the precautionary principle, so far as relating to the environment

(d) the principle that environmental damage should as a priority be rectified at source, and

The following were in the draft but no longer appear:

⁃ the principle of sustainable development

⁃ the principle of public participation in environmental decision-making, and

⁃ the principle of access to justice in relation to environmental matters

I get why the principle of sustainable development has been removed from the list and made an overarching requirement (and I support that as otherwise we would have risked detailed principles set out in a policy statement that may have conflicted with the NPPF, although I wonder how the overarching requirement will be interpreted without further explanation), but why the removal of those Aarhus Convention principles?

Government ministers were to be required to “have regard” to the policy statement. As explained in the Government’s Response, this has been beefed up to “have due regard”. I hadn’t appreciated that this was a higher legal threshold but will bow to others. There is still surely a question as to whether this is strong enough.

The principal objective of the Office for Environmental Protection and exercise of its functions is now set out, as “to contribute to –

(a) the protection of the natural environment, and

(b) the improvement of the natural environment”.

One of my concerns as to the potential scope of the OEP’s operations was that it might get drawn into individual planning disputes. The Government addresses this in its Response:

“We agree, however, with the core of the Committee’s comments around avoiding the OEP becoming inundated with complaints relating to local matters. This is not our intention. Clause 20(7) in the Bill introduced today (formerly clause 12(4)) already directs the OEP to prioritise cases with national implications. We believe this already guards to a significant extent against the Committee’s concerns regarding the OEP having to take on too many complaints relating to local matters or being at too much risk of challenge over its own judgements. However, we have considered this matter further, and have now amended the Bill to provide that the OEP’s enforcement policy must set out how it intends to determine whether a failure to comply with environmental law is serious for the purpose of subsequent clauses (clauses 20(6)(a) and (b) in the Bill introduced today). This should provide greater transparency in relation to the OEP’s approach to the meaning of the term “serious”, and guard against this further.”

My main concern as to the previously proposed procedures was that it was envisaged that the OEP might bring judicial review proceedings in the High Court, a year or more after the decision under challenge, and secure the quashing of the decision, as one of the remedies available. Plainly, this would have introduced unwelcome and unworkable uncertainty into the development process.

I have been impressed at the openness of DEFRA and MHCLG civil servants during this process. Indeed we at Town held last year a breakfast event and, after sharing the concerns of many around the table on precisely this issue, I suggested that “statement of non-conformity” outcome might be more workable, drawing upon the approach in the Human Rights Act 1998.

To my pleasant surprise, the proposed judicial review mechanism has been replaced with provision for an “environmental review” to be brought in the Upper Tribunal.

“(5) On an environmental review the Upper Tribunal must determine whether the authority has failed to comply with environmental law, applying the principles applicable on an application for judicial review.

(6) If the Upper Tribunal finds that the authority has failed to comply with environmental law, it must make a statement to that effect (a “statement of non-compliance”).

(7) A statement of non-compliance does not affect the validity of the conduct in respect of which it is given.

any remedy that could be granted by the court on a judicial review other than damages, but only if satisfied that granting the remedy would not—

(a) be likely to cause substantial hardship to, or substantially prejudice the rights of, any person other than the authority, or

(b) be detrimental to good administration.”

The Government’s Response said this:

“The approach will have a number of benefits compared to that of a traditional judicial review in the High Court. In particular, taking cases to the Upper Tribunal is expected to facilitate greater use of specialist environmental expertise.”

Judicial review will still be available if the OEP considers that a public authority’s conduct “constitutes a serious failure to comply with environmental law”.

There are now fewer exclusions to what falls within the ambit of “environmental matters” for the purposes of Part 1. Unlike the draft, the Bill does not exclude matters relating to:

⁃ taxation, spending or the allocation of resources within government.

Thumbnail sketch of the rest of the Bill

⁃ deposit schemes and charges for single use plastic items

Part 5 covers water, including powers to direct water undertakers to prepare joint proposals for the purpose of improving the management and development of water resources.

Part 6 covers nature and biodiversity, including:

⁃ tree felling and planting (including requirements for local highway authorities in England to consult before felling trees).

“Schedule 15 makes provision for biodiversity gain to be a condition of planning permission in England”.

These provisions will also be important for users of the planning system. The provisions follow DEFRA’s February 2019 consultation paper and seek to provide a legal mechanism for landowners to give binding conservation covenants.

As described in the consultation paper, “a conservation covenant is a private, voluntary agreement between a landowner and a “responsible” body, such as a conservation charity, government body or a local authority. It delivers lasting conservation benefit for the public good. A covenant sets out obligations in respect of the land which will be legally binding not only on the landowner but on subsequent owners of the land.”

So sorry to have kept you from the rugby, Brexcitements or other more healthy Saturday activities – perhaps even enjoying the natural environment.

Admission: I did press print. 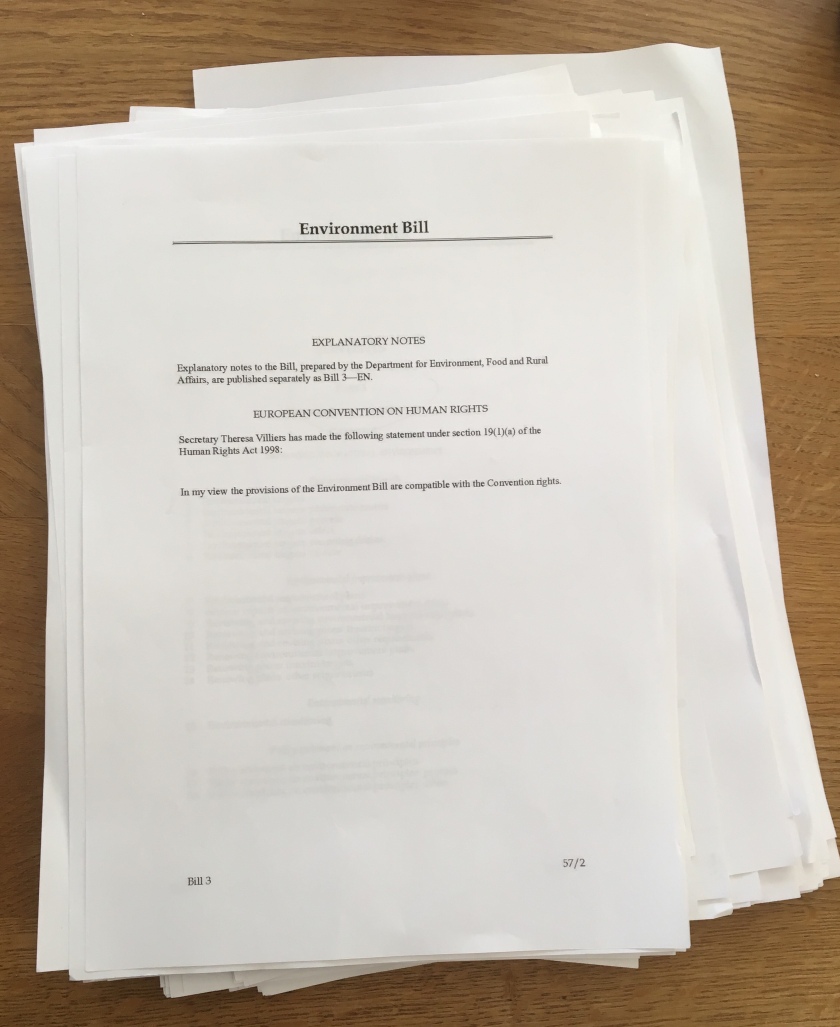