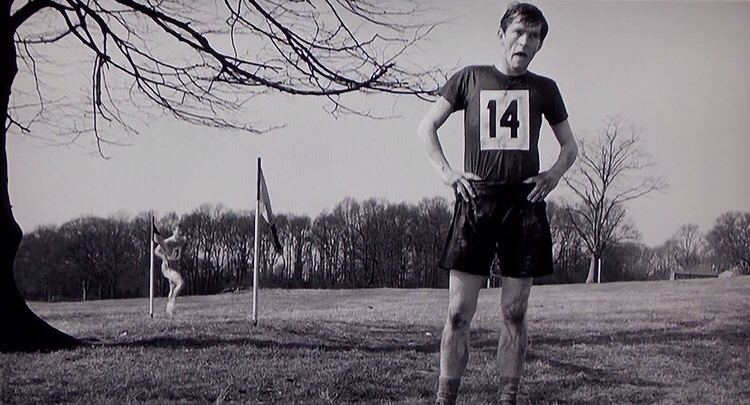 Two cases last week reminded me as to how difficult the role of the planning inspector is. The two inspectors in question, architect John Gray and solicitor Karen Ridge, both faced conflicting evidence and submissions on issues which were largely matters of evaluation and judgment, albeit within narrow policy tramlines, at inquiries lasting six and eight days respectively. Congratulations are due to them both given that their decisions survived legal challenges – or, following Lord Carnwath’s approach in Suffolk Coastal (“the courts should respect the expertise of the specialist planning inspectors, and start at least from the presumption that they will have understood the policy framework correctly“) and the regular judicial criticism as to “excessive legalism” on the part of claimants, is it simply that the hurdle for a successful challenge is nowadays higher?

In Catesby Estates Limited and Secretary of State v Steer (Court of Appeal, 18 July 2018) at first instance Lang J had quashed John Gray’s decision letter in which he had allowed two appeals by Catesby, one relating to a proposal for up to 400 dwellings and a convenience store and the other for up to 195 dwellings, both on land about a mile away from the grade 1 listed Kedleston Hall.

The arguments at inquiry and subsequently revolved around the extent to which the site should be treated as within the setting of the hall and other designated heritage assets. Since the 1960s, views of the site from the hall and vice versa had been blocked by a belt of trees known as the “Derby Screen”, planted at the time to obstruct views of the expanding suburbs of Derby. Given the protection given to the setting of listed buildings by way of section 66 (1) of the Listed Buildings Act 1990 and the NPPF, supported by Historic England guidance, much turned on that question.

Lang J had agreed with submissions of the claimant and Historic England that “the Inspector adopted an artificially narrow approach to the issue of setting which treated visual connections as essential and determinative. In adopting this approach, the Inspector made an error of law.”

However, the Court of Appeal undertook a close examination of the inspector’s reasoning and overturned Lang J’s ruling. They found that the inspector had correctly considered two potential ways of looking at the setting of the hall, one considering visual and physical connections and the other looking at wider historical, social and economic connections. The court determined that he had then gone on to consider all the relevant issues before, in the particular circumstances, arriving at a narrower interpretation. His conclusions did not “betray an unlawful approach, in which considerations other than the visual and physical were disregarded“.

In reaching that conclusion, McFarlane LJ’s judgment in the Court of Appeal does usefully set out the approach to setting that should be taken by decision makers:

“Although the “setting” of a listed building is a concept recognized by statute, it is not statutorily defined. Nor does it lend itself to precise definition (see R. (on the application of Williams) v Powys County Council [2017] EWCA Civ 427, at paragraphs 53 to 58). Implicit in section 66 of the Listed Buildings Act, however, is that the setting of a listed building is capable of being affected in some discernible way by development, whether within the setting or outside it. Identifying the extent of the setting for the purposes of a planning decision is not a matter for the court, but will always be a matter of fact and planning judgment for the decision-maker. And as Sullivan L.J. said in R. (on the application of The Friends of Hethel Ltd.) v South Norfolk District Council [2011] 1 W.L.R. 1216, “the question whether a proposed development affects, or would affect the setting of a listed building is very much a matter of planning judgment for the local planning authority” (paragraph 32 of the judgment).”

As McFarlane LJ had set out previously in the Williams case, “the circumstances in which the section 66(1) duty has to be performed for the setting of a listed building will vary with a number of factors – typically, “the nature, scale and siting of the development proposed, its proximity and likely visual relationship to the listed building, the architectural and historic characteristics of the listed building itself, local topography, and the presence of other features – both natural and man- made – in the surrounding landscape or townscape”, and possibly “other considerations too”, depending on “the particular facts and circumstances of the case in hand” (paragraph 53). To “lay down some universal principle for ascertaining the extent of the setting of a listed building” would be, I thought, “impossible”. But – again in the particular context of visual effects – I said that if “a proposed development is to affect the setting of a listed building there must be a distinct visual relationship of some kind between the two – a visual relationship which is more than remote or ephemeral, and which in some way bears on one’s experience of the listed building in its surrounding landscape or townscape” (paragraph 56).

This does not mean, however, that factors other than the visual and physical must be ignored when a decision-maker is considering the extent of a listed building’s setting. Generally, of course, the decision-maker will be concentrating on visual and physical considerations, as in Williams (see also, for example, the first instance judgment in R. (on the application of Miller) v North Yorkshire County Council [2009] EWHC 2172 (Admin), at paragraph 89). But it is clear from the relevant national policy and guidance to which I have referred, in particular the guidance in paragraph 18a-013-20140306 of the PPG, that the Government recognizes the potential relevance of other considerations – economic, social and historical. These other considerations may include, for example, “the historic relationship between places“.”

The judge drew out three points:

“First, the section 66(1) duty, where it relates to the effect of a proposed development on the setting of a listed building, makes it necessary for the decision- maker to understand what that setting is – even if its extent is difficult or impossible to delineate exactly – and whether the site of the proposed development will be within it or in some way related to it.”

“Secondly, though this is never a purely subjective exercise, none of the relevant policy, guidance and advice prescribes for all cases a single approach to identifying the extent of a listed building’s setting. Nor could it. In every case where that has to be done, the decision- maker must apply planning judgment to the particular facts and circumstances, having regard to relevant policy, guidance and advice. The facts and circumstances will differ from one case to the next.”

“Thirdly, the effect of a particular development on the setting of a listed building – where, when and how that effect is likely to be perceived, whether or not it will preserve the setting of the listed building, whether, under government policy in the NPPF, it will harm the “significance” of the listed building as a heritage asset, and how it bears on the planning balance – are all matters for the planning decision-maker, subject, of course, to the principle emphasized by this court in East Northamptonshire District Council v Secretary of State for Communities and Local Government [2015] 1 W.L.R. 45 (at paragraphs 26 to 29), Jones v Mordue [2016] 1 W.L.R. 2682 (at paragraphs 21 to 23), and Palmer (at paragraph 5), that “considerable importance and weight” must be given to the desirability of preserving the setting of a heritage asset. Unless there has been some clear error of law in the decision-maker’s approach, the court should not intervene (see Williams, at paragraph 72). For decisions on planning appeals, this kind of case is a good test of the principle stated by Lord Carnwath in Hopkins Homes Ltd. v Secretary of State for Communities and Local Government [2017] 1 W.L.R. 1865 (at paragraph 25) – that “the courts should respect the expertise of the specialist planning inspectors, and start at least from the presumption that they will have understood the policy framework correctly“.”

In CEG Land Promotions II Ltd v Secretary of State (Ouseley J, 18 July 2018), inspector Karen Ridge had dismissed an appeal in relation to a scheme for up to 175 dwellings and associated development on land adjoining Wendover in Buckinghamshire.

The challenge revolved around two issues:

⁃ whether the inspector had double counted the effects on landscape in weighing up the considerations against grant of planning permission, by taking into taking into account breach of paragraph 109 separate from breach of relevant local plan policies in relation to landscape, together with related points as to whether paragraph 109 amounts to “specific policies” that “indicate that development should be restricted“, to be taken into account in the paragraph 14 “tilted balance”.

Ouseley J introduces consideration of the NPPF with a note of caution as to its status:

“In relation to development control, despite some of its language, it is no more than a material consideration, to be taken into account in deciding planning applications under s70 of the Town and Country Planning Act 1990. It is a material consideration which may indicate that a decision should be made which does not accord with the development plan; s38(6) Planning and Compulsory Purchase Act 2004.”

After a detailed analysis, Ouseley J found no evidence of “double-counting” harm:

“There is a danger of over-analysing decision letters, with the risk that in doing so, error is found where none exists.”

He similarly found nothing wrong with the inspector’s “valued landscape” conclusion:

“It would be […] bizarre to adopt a wholly artificial approach to landscape evaluation where, in most cases, a development site is but part of a wider landscape. In my judgment, the Inspector, in the case before me now, has analysed the issue very well and come to the entirely correct conclusion.”

Both judgments, together with the inspectors’ decision letters under challenge, would make good case studies for the current independent review chaired by Bridget Rosewell into the planning appeal inquiry process. Neither development proposal was particularly large but both led to relatively long inquiries. Against the context of unclear, multiple layers of policy and guidance and the predictable dissection by each of the main parties as to policy meaning and application, is there really any room for shortening the process without affecting its quality? Controversial question: Are the layers of abstraction, and the lonely task of sitting down to write a lengthy decision that is bullet-proof in its reasoning, necessary for a high quality process, or simply impeding it?

And regardless of the answer to that question, let us recall that only 2% of planning appeals proceed by way of inquiry and it should surely be at least as important that the Planning Inspectorate urgently reduces its timescales for processing appeals that are conducted by way of written representations or hearings, as well as by way of simpler (ie “non-bespoke”) inquiries, given the statistics set out its latest annual report (12 July 2018). 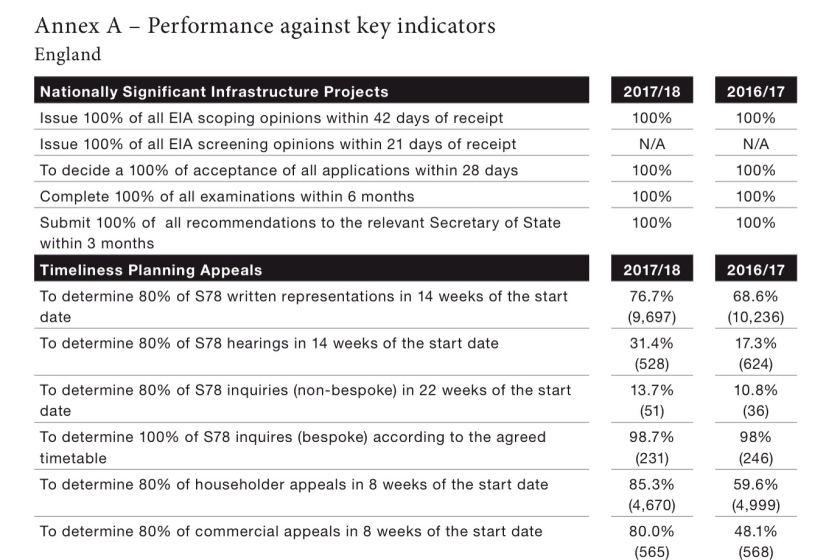