It’s the examination season: daughter, university finals; son, A levels; me, asked by a journal for my thoughts on the interim report published by the Raynsford Review (Planning 2020: Interim report of the Raynsford review of Planning in England May 2018). I’m sharing my first thoughts with you so please set me right, because I really don’t want just to write a piece damning the whole process with faint praise.

I wrote a blog post on 28 August 2017, Another Review when the review was announced, instigated by the Town and Country Planning Association “to identify how the Government can reform the English planning system to make it fairer, better resourced and capable of producing quality outcomes, while still encouraging the production of new homes.”

The review’s chair, Nick Raynsford, is the right person for the role. His professional life inside and outside Parliament has focused on planning and housing issues.

“The planning system is a machine, big cogs, little cogs, to deliver the government of the day’s social, economic and environmental objectives. Unless the review is just to be about process, what objectives are to be assumed in framing recommendations?”

Turning to the interim report published last month. It’s all to play for because a “final round of feedback” is sought by 16 July 2018.

The 71 page document is strong on the evolution of the modern planning system from 1947, previous reviews and on summarising the current system. It recounts the numerous public events and meetings held by the review team and the 197 submissions of evidence received, before setting out seven “emerging policy themes“, nine “basic questions which define the direction of reform” and, provisionally, nine “propositions for a new planning system“.

So we have (each accompanied in the document by explanatory text):

• the degree to which the current system is delivering on
its objectives;

• how much power spatial planning should have
(positive and negative);

• how the balance of planning powers should be
distributed between central and local government;

• the right spatial structure for planning, including local
government structure and boundaries;

• the degree to which communities should have
meaningful control over their own local environment,
and the nature of community rights; and

Basic questions which define the direction of reform

• What is the justification for a spatial planning system in

• What is purpose of a spatial planning system, and how should this be expressed?

• What should the scope and powers of the spatial planning system be?

• What should the governance arrangements for these structures and institutions be, and what role, and how much power, should there be for the citizen in decision-making?

• What are the basic outcomes that people can expect from the planning process?

spatial planning?
• What taxation or charging measures are necessary to

deal with the economic impact of land use regulation?

• What sorts of skills, practice and culture do planners

need to support the system?

Propositions for a new planning system

Proposition 1: Planning in the public interest

Proposition 2: Planning with a purpose

Proposition 7: Alignment between the agencies of English planning

Proposition 9: A new kind of creative and visionary planner

The conclusion of the analysis in the work so far is that planning is “at a historically low ebb“. It is in a worse state than it has been for 75 years and that “the last thing that is needed is more short-term tinkering with the nuts and bolts. Instead, what is required is a deep and hard look at the fundamentals – what should be the purpose of planning, how can it best be structured to deliver the outcomes that the country needs, and how can all parties be engaged most constructively in the process?”

You begin to see the breadth and ambition of the project. But if wholesale change is to be prompted by a process that is not sponsored by government or government-in-waiting, there is a huge job of work to be done by the review panel between now and the final report, which is to be published in the Autumn for the party conferences.

First, avoid generalities. Set out with quantified evidence why and where the planning system is not delivering. What detailed points were made in the responses and do they reflect the views of all participants in the planning process?

Secondly, bring the issues to life. The interim review in tone is part academic, part old-fashioned tub-thumping, empty of people, empty of place. If you want to see how to do it, read The Secret Barrister’s devastatingly detailed critique of the modern criminal justice system.

Thirdly, set the problems and gripes that we have with our planning system in context. The planning system may appear at times and in places to be on its knees, or dysfunctional in the way that it operates. But in comparison with areas of public administration, whisper it quietly, it may not be so bad. I have mentioned the criminal justice system, but the health service, benefits, the rating system even (having just read Jerry Schurder’s 8 June 2018 blog post What we could learn from the rest of the world – if only the Government was interested). I have practised under every iteration of the planning system since 1985. If there was a golden age, it was before then I assure you. And yet, by and large, outcomes are fair (if slow), people have their say, development happens or doesn’t happen. Let’s also set our system in an international context – how is our English system performing as compared to the rest of the United Kingdom or Europe?

Fourthly, recognise and reflect on the inherent contradictions. The interim report talks of giving the public a greater say in decision-making but then of a new commitment to meeting people’s basic needs such as the right to a home and of the “deployment of modernised Development Corporations to deal with particularly demanding issues such as flood risk, economic renewal, and population change“. It talks of simplified planning laws but then of a four tier system of neighbourhood, local, regional and national alongside development corporations and of new interventions to share land values.

Fifthly, give appropriate emphasis to the need to encourage the production of new homes, specifically referred to in the remit of the review. So far I see little in the interim report that would give that encouragement. Indeed, the document strongly criticises the current permitted development right to convert office uses to residential, without any detailed analysis of whether the disbenefits do indeed outweigh the benefit acknowledged in the report (between 86,665 and 95,045 units delivered between 2010 and 2017).

Sixthly, explain how we are going to get from here to there. The document reports the planning system as having “been in an almost constant state of flux over the past decade and a half” but how would we reform the system to Version Raynsford without equivalent upheavals? And if we assume that there is no prospect of wholesale change within the shelf life of the report, what might be less ambitious, but still helpful, interventions?

Seventhly, acknowledge that the next ten years will see enormous changes, whether economic-political (Brexit, possibly), social (how we live, work, shop) and technological (spatial implications but also the changes that plantech will bring to the very processes of planning and public engagement).

In the meantime, utopian thinking shouldn’t deflect us from events which may have more immediate implications.

First, Sir Oliver Letwin’s build-out review is continuing at pace. It is looking to “explain the significant gap between housing completions and the amount of land allocated or permissioned in areas of high housing demand, and make recommendations for closing it”. Sir Oliver has indicated that he will publish “analytical work by the end of June in the form of a Draft Analysis. This will contain only a description of the problem and of its causes”

Secondly, MHCLG will be publishing this month a consultation paper in relation to further potential widening of permitted development rights. The review panel won’t enjoy that I’m sure.

Thirdly, practical thinking continues on land value capture. Commons HCLG Committee on Land Value Capture held an oral evidence session on 4 June 2018 (read the transcript) with a further session on 11 June at which the TCPA’s Hugh Ellis (who should take huge credit for the work that he has put into the Raynsford review process) will appear, alongside others including lawyers Barry Denyer-Green, Stephen Ashworth and Vicky Fowler.

Fourthly, the Labour party continues to announce policy reviews, most recently in April, Housing For The Many.

All of this is interesting of course (and, despite my carping, the Raynsford interim report is an impressive and illuminating piece of work) but until there is a very different political climate (with the time and power to think about big, complicated changes for the public good – and even then town and country planning should take its place in the queue), we plainly will need to carry on making the best of the current system. It creaks, but it isn’t broken. Of course, at the very least, consolidation of the legislation would be helpful, but at present even that seems an impractical dream. 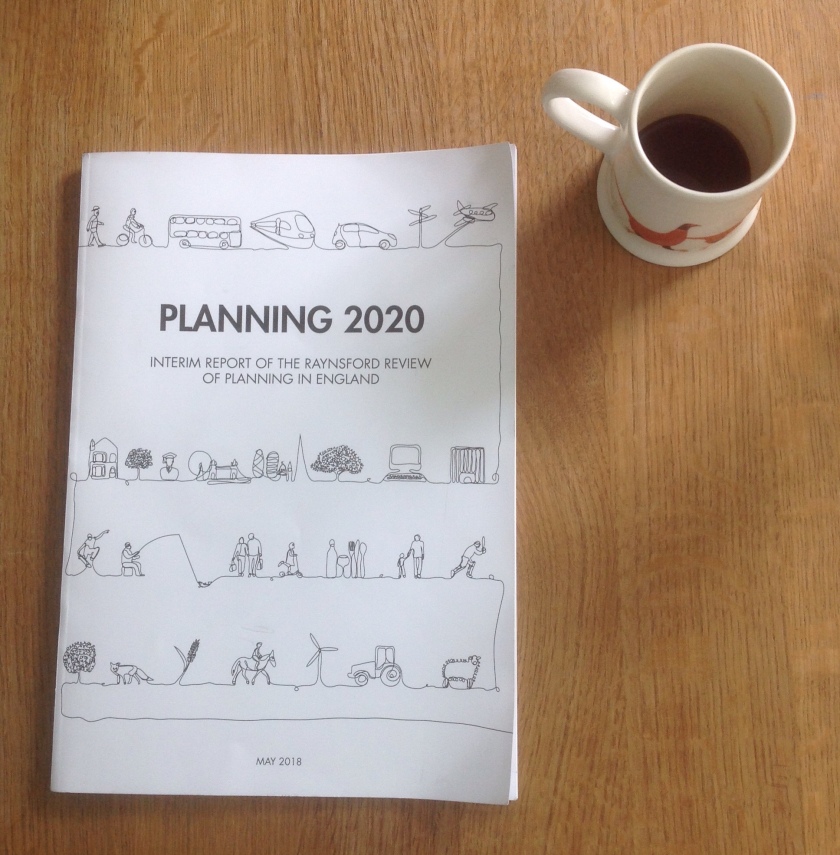